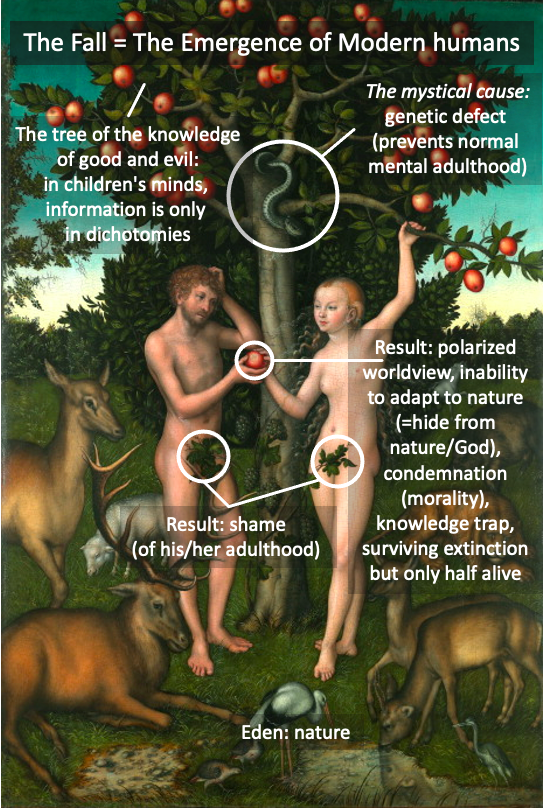 There are many reasons to believe that the narrative of the Fall of Man has nothing to do with current theistic religions nor their doctrines. Instead, it can be called a pre-scientific explanation of the origin of man. And the explanation is a psychological one.  What it says is that religions were initially born out of the problematic nature of human psychic development.

The serpent of paradise is an apt metaphor for a traitorous gene that had the means to poison the entire human family by transforming it mentally juvenile for good.

There are countless interpretations of Adam and Eve. My hypothesis offers one more. According to it, the story of Adam and Eve aptly illustrates the first humans, i.e. the origin of man. I do not claim that this is the correct interpretation but that it appears compatible with my observations. I willingly confess that I find the story extremely intriguing. I would argue that the early Semitic tribes from whom the account is likely to have come were well aware of what was wrong with the man. I think it lets us know that once, in the distant past, people were able to explain our singularity much better than today, even though we have a thousand times more information available than the people in those days.

The story gives an interesting perspective on the emergence of modern humans. We can see two separate stages for human “evolution”. One scene is when God creates a man, and the other is when Adam and Eve eat the forbidden tree’s fruit. Homo sapiens does not appear in the world when God makes them, but only when Adam and Eve eat from the tree of the knowledge of good and evil. The first creation means the origin of our ancestors. The latter implies homo sapiens and explains why man diverged from the path of earlier homo species. Even though God created man in his image, the man was not willing—or was unable—to be like this image. That means that they were unadaptable to live in nature like other beings. Thus, we can see that the story depicts the emergence of our species as a separation—separation from nature and the animal world. It also describes amazingly well what qualities led to the break. Let’s take a look!

The Fall of Man identifies the human mental growth disorder 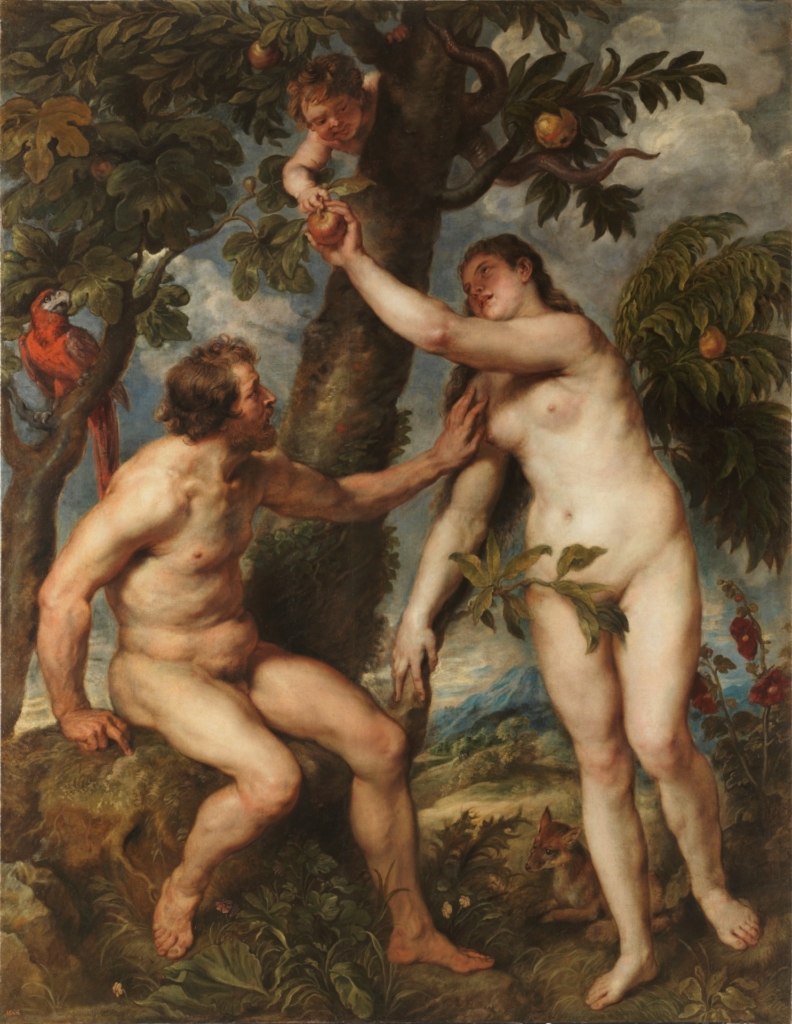 In this painting, Adam and Eve can well be seen as “Heidelbergs” before the hereditary growth disorder spread to the entire species and permanently transformed us into adolescents. The serpent depicts the mysterious factor, the gene defect, that will make us human. Note that, in Rubens’s work, the “serpent” is child-headed! It is also worth noting that, according to the story, animals belonged to the Garden of Eden and stayed there. Therefore, Eden cannot mean anything else but nature. That makes sense because that is how we feel about nature: we are outsiders to whom the secret circle of nature is off-limits. Accordingly, the biblical expulsion equals culture and civilization, which we have provided only with things appropriate for juvenile understanding.

The fruit of the tree of the knowledge (of good and evil) teaches the art of judgment. It is indeed necessary for children, but not for adults. Judgment means more than just the distinction between good and evil. It also signifies the difference between ugly and beautiful, existing and non-existing, similar and different, changing and unchanging things. It means distinctions measured in numbers, distances, sizes, times, and places. It signifies everything we can do by comparing things with each other. In other words, it indicates cognition, and that means we are not adults. Of course, the distinction between good and evil, or morality, is the most despicable form of understanding. Adam and Eve willfully violated the prohibition, even though God reminded them that breaking it would result in death. They would be “doomed to die”. If we suppose that the Heidelbergs made this mistake, we can say that prophecy was correct—they did die out! Or partially, at least, the genetic defect saved the bad apples.

If we’d understood the fruit as a symbol of cognition, it would be difficult to find a reasonable explanation for the scheming snake, which entices Adam and Eve to eat that fruit. However, if we examine the story in terms of human emergence, we can see how the gene defect slithers into the human mind in the form of a serpent. The serpent is an apt metaphor for a traitorous gene that had the means to poison the entire human family by transforming it mentally juvenile in perpetuity. It is evident, of course, that the people who created the story could not imagine anything like genes, let alone genetic defects. However, they understood that the problem had to do with human creation! Otherwise, the Creation and the Fall of man would be separate stories. The genetic defect is guileful, but it also belongs to nature, just like the snake. Nature, or God,  created it with good intentions as everything else in paradise, but it caused an accident.

The biblical serpent can be explained 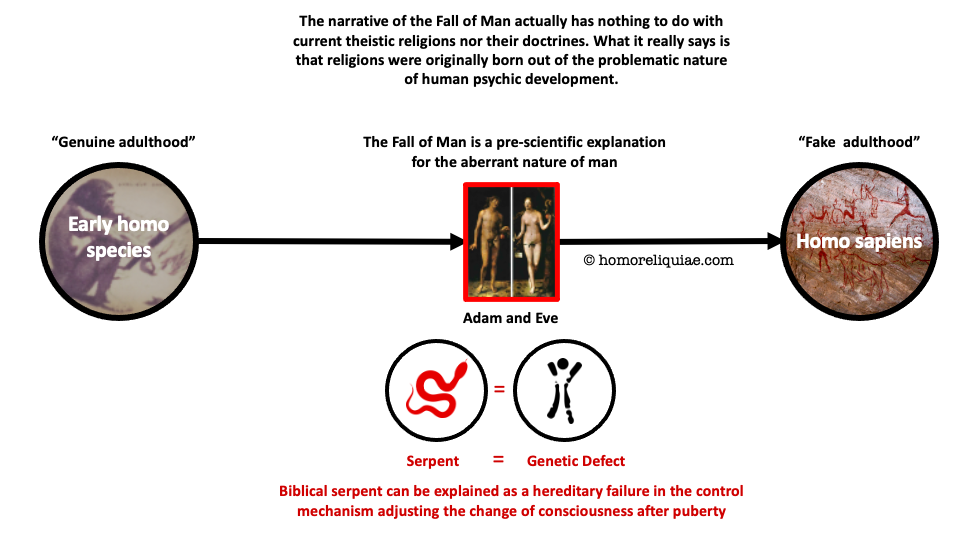 Although people back then could not know the genes, they did know that the human had evolved wrong at some point. They just guessed that this was the case because, on the one hand, it was difficult to explain the odd and mystical experiences of some people, and on the other hand, because the man had separated himself from nature (“paradise”). That is a serious attempt to explain human nature, and it is by no means an entertaining fable.

Adam and Eve also learned to be ashamed of their nudity and hide the marks of the natural adult body made by God (nature). It is evident that nudity was not forbidden in Eden (in nature), but nudity was considered shameful. Shame is a juvenile peculiarity. Just as Adam and Eve are ashamed of their natural corporality and hide from God, civilisation turns its back to the origin of its species. It creates moral rules (“knowledge of good and evil”) to steer man away from his brutal adult past. Then it defines the Garden of Eden (nature) as wild, chaotic, undeveloped, and low, and to be avoided. Accordingly, civilisation is understood as a quest for higher and advanced spirituality.

In urban cultures, this is reflected in the gods tamed and purified, made clean and tidy. Rulers did that for practical reasons: irrational and instinctive deities were too crude and shameful for a spiritually rejuvenated and orderly society. Instead, the gods were regarded as heroic, shiny, and unattainable rulers. Paradoxically, civilisation despises adulthood and nature, but it declares admiration for them in arts, religions, and wisdom. Eventually, civilisation deliberately hid the problematic relationship between man and nature under many scholarly and administrative doctrines layers until it became taboo. Still, society’s mission has remained the same: through education, civilisation eradicates the irrationality, instincts and immorality inherent in archaic adults. It builds the wall between nature and man. So, the curse is still upon man. The God in Eden is the God of nature. If not nature itself, it is far from being a god of civilisation. The story of Adam and Eve speaks powerfully against the juvenile characteristics that we all carry for some strange reason. It is worth noting that children should not meddle with religion or psychedelics, as these are for the ailing adults only.

Joseph Campbell speaks about living in alignment with Nature. 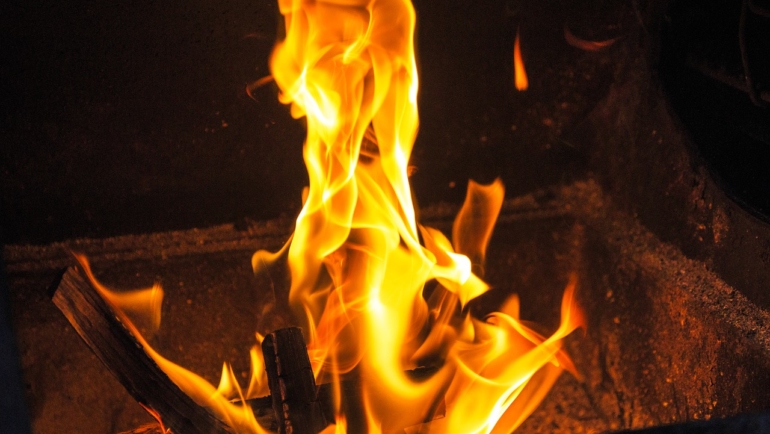 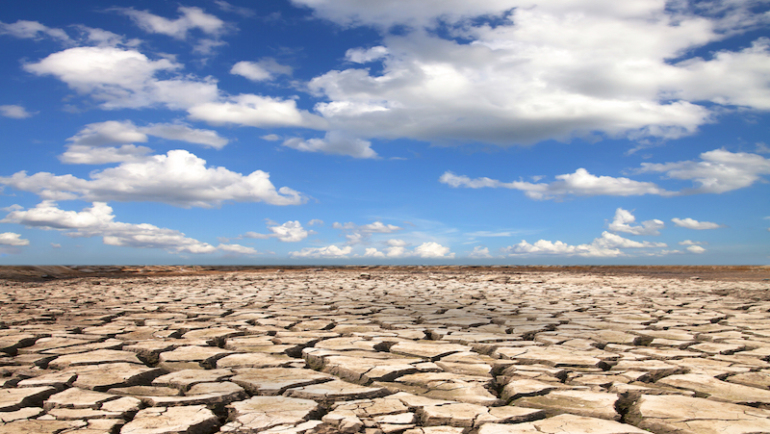 Where have we come from?